I noticed a bare patch of skin on Gravy’s elbow, it was hard to the touch and rough.

As a loving pet parent, I was concerned that maybe this could spread or become infected. I certainly didn't want him to suffer.

I called a veterinarian friend to see if they knew what it was. After sending over a picture, they informed me it was most likely a dog elbow callus.

What is a dog elbow callus?

It is a skin condition when one or several spots on their skin get thicker, hairs in that area often fall out, and the skin surface becomes rough.

Like Gravy, almost 20% of all dogs will suffer from calluses on their elbows at some point.

While they are usually not painful or dangerous, they can be itchy and uncomfortable to some dogs, not to mention unattractive.

In some cases, if elbow calluses are left untreated, they can crack and bleed, becoming sores that can get infected.

A dog elbow callus infection is not likely, but it is possible. If the skin has become so dry and crusty that it starts to bleed, it can become a breeding ground for infection.

Often dogs will lick a wound, which can worsen their condition. If your dog's skin is bleeding or red and inflamed, it's best not to apply anything to it and take them to the vet.

Gravy's elbow wasn't infected, so I continued searching to find out why this happened and what I could do to treat it.

Gravy loved to burrow underneath a bench in our backyard; he would crawl with his elbows on the hard stone to get there.

After doing this many times, his body formed calluses to protect the bones in his elbows from being damaged. Think of them as nature's elbow pads.

While they were on his elbows, it's also possible for them to appear on the hocks, hips, sternum, and legs.

Are some breeds more likely to get one?

Elbow calluses can affect all dogs. However, large breeds are more likely to suffer from this condition because their increased weight puts more pressure on the elbow.

Dogs with short coats also have an increased likelihood of developing calluses as they have less cushioning on their bony parts.

Be extra vigilant if your dog is large and short-haired like my boy.

Here are some home remedies you can try if your dog is experiencing or you want to prevent dog elbow callus.

WHAT TO PUT ON A DOG ELBOW CALLUS

After making changes to Gravy's home to try and stop the callus from re-occurring, it was time to see what I could do to treat it.

I had used Vaseline (petroleum jelly) on my own rough skin before, so thought maybe that was worth investigating. However, before even using it I realized if Gravy was to lick it off, which he more than likely would, it would cause stomach problems as its not at all natural.

I had some coconut oil at home and had read it was a great natural moisturizer. After applying it to Gravy's elbows, I quickly figured that this probably wouldn't work.

The coconut oil was too liquid and made a huge mess. It would not stay on long enough to be an effective moisturizer. It was back to the drawing board.

I searched online and was bombarded with ads for an elbow elbow butter for dogs. I decided to give it a shot.

At first, it seemed to work; It was clearly moisturizing his skin. Unfortunately, I was disappointed after I used up the whole tube a month later. His elbows were still rough and crusty. At this point, I felt like i'd tried everything.

Not only had I taken away the access to the hard surfaces he was encountering, but I'd also spent money on products designed specifically for this.

I started researching to see if I could find a solution. I'd already helped my arthritic dog Biscuit with our CBD oil. Could this possibly work for Gravy's skin issues too?

It turns out that, yes, CBD can interact with receptors in a dog's skin. Maybe I could make a more effective product for dog elbow calluses. I wanted to use only human-grade organic ingredients and make sure they would be safe for dogs even if eaten.

After talking to several vets and chemists, many failed attempts, I had something.

I chose a specific blend of essential oils that, while completely safe for dogs, gravy wasn't interested in licking off. I also made it in tube form so that it could be applied to cracked elbows without creating a mess.

It was time for testing, human testing. Thankfully, no humans were harmed, so it was Gravy's turn.

I twisted up the tube and covered his callus in the balm, massaging it into the layers of the callus.

I continued to apply it three times a day for the next two weeks.

The CBD Soothing Balm was the extra boost his skin needed to regain a healthy balance.

A few months later, I decided to share this product with other pet parents.

Since then, Gravy and I have helped thousands of dogs with dry and damaged skin. What's more, we guarantee the product so if you're not happy; you don't pay a cent. 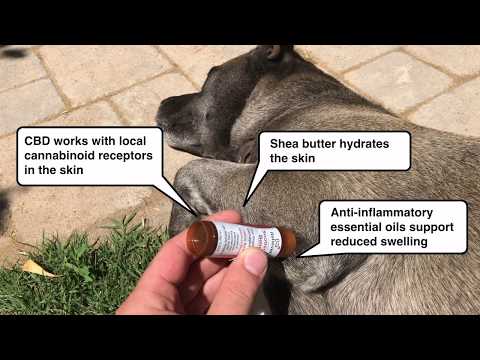